"I find", says Tan in his book of sketches The Bird King, "that good drawing requires conscientious effort: active research, careful observation of things around me, ongoing experimentation and reference gathering, all of which exist 'behind the scenes'."
Well I'm so glad I booked some hours off yesterday,  away from my usual juggling, crossing England to do a little of that 'behind the scenes' stuff myself, to sketch on the red-eye from London to Newcastle 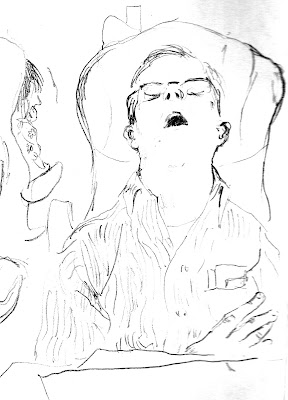 see Shaun Tan talk and a show celebrating Puffin Books, and meet some scbwi friends at the wonderful Seven Stories.
First, as a young Puffineer (from - arrgh!- the late 60s) the excellent Puffin exhibition at Seven Stories until the end of September was a treat.  Very moving to see all the dedicated, 'behind the scenes' work of publishers, authors and illustrators, working together for kids.
The chronogical layout of the show revealed a shift - hum, cultural or commercial? - from what seemed like  'deeper' if not quieter book covers up to the 1970s,  which seemed to whisper  "open this and give the story a go!"to more marketed, type-cast covers from the 1980s onwards, that seem to shout 'buy this if you like this genre!'
The legendary editor and original Puffin club founder Kaye Webb wrote to me on winning an essay prize when I was 10 or so in red pen, and with some concern "I do hope you like this prize as it's hard to know what  you haven't already got."   And a similar spirit of openness, respect and delight rings out in all her letters on display sent to authors and illustrators as well as kids.  To see preparatory sketches for such masterpieces as Janet Ahlberg's Each Peach, Pear, Plum.. and writers' drafts was like coming home.    No photos where allowed in the Puffin show for copyright reasons, so here are some snaps of the lowest of the Seven Stories -  the children's Creation Station. 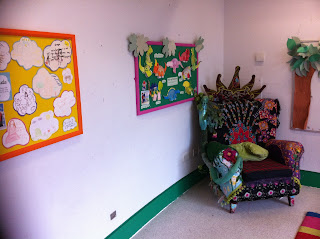 A curiously apt way to tune up for an afternoon in Shaun Tan's imagination... 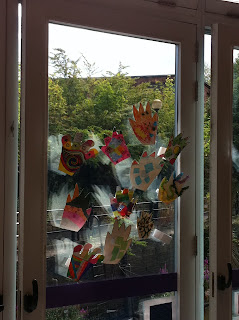 And so up to the Seventh floor for  Shaun Tan's talk. 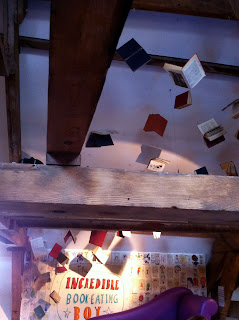 In a large but intimate attic space, with books hanging in constellations from the rafters,
Shaun Tan began with a disarming smile and spoke in a soft Aussie accent.  He was wonderfully unassuming and lucid.  He ended too by insisting that he wasn't wise, and didn't want to preach...all he did was "report things in a strange way".

"Staring at a blank piece of paper "Shaun Tan writes in his book The Bird King and other sketches,

"I can't think of anything original.  I feel utterly uninspired and unreceptive....in such such circumstances there is only one thing to do: just start drawing....
...Images are not preconceived and then drawn, they are conceived as they are drawn.  Indeed, drawing is its own form of thinking, in the same way birdsong is 'thought about" within a bird's throat."
Shaun Tan then quotes the artist Paul Klee's metaphor of the artist as a tree, "drawing from a rich compost of experience - things seen, read, told and dreamt - in order to grow leaves, flowers and fruit...artists do not create so much as transform.  That's not to say,  the process is a casual or simple one."   He talked a bit more about what he wrote here,  when I questioned him at the end of his talk.  Observational drawing gives you a mental library which you can refer to in the emergency of drawing without having to go back to refer to the original... 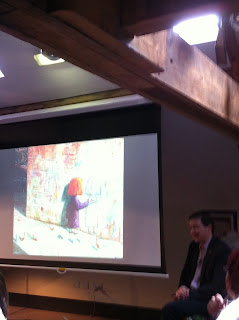 Shaun began by speaking of how he liked to resist impossible-to-answer questions such as "what is your 'typical day?" by responding in pictures as he did for the recent newspaper interview in Der Spiegel, which you can see here.
He talked about
- lazy and workful days, all different, in a workplace which is pretty banal, "like a kitchen but with pencils"
- the drafts that land on the floor, the wastage, the starting-over
- the moment somewhere in the middle of a project when it all seems pointless.
That moment when it feels like you are "providing goods and services that no one is asking for and  it all seems self-indulgent"
- and then somehow, unexpectedly there's a turning point, when you tell yourself not to worry so much,
a point of uncluttered, un-self-conscious creativity that feels truthful,  that is simple and straightforward.  Something akin to what child make, unquestioningly as this.... 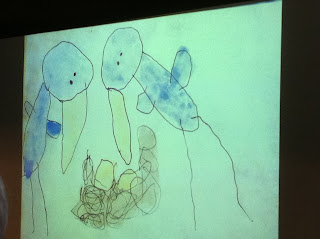 From learning that drawing could help him make school friends, and watching lots of TV and films, Shaun moved to writing SciFi.  The stories were rejected but he got his first commission for Sci Fi books from the age of 16, illustrating an impressive 200 books in his student years.

This led  eventually to his first children's book commission, to illustrate a picture book by the popular young adult fiction writer John Marsden called The Rabbits.    Shaun said that to start with he couldn't think of what to draw and then realized that "rabbit" doesn't have to mean a rabbit.  It taught him early on something many of us, publishers included, often seem to forget these days - that picture books can be about difficult subjects. 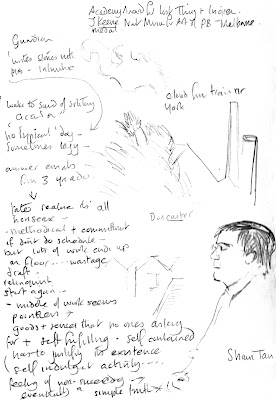 My sketchbook filled fast.
Shaun talked a lot about going against language and  fighting preconceptions in his books.  We use language, he said, to describe a nameless world... 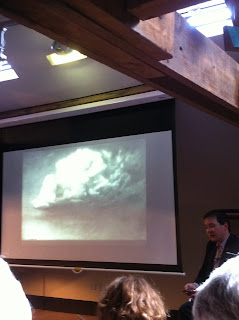 Finding a new way of looking can help to resist preconceptions.
Humour too can help you think laterally.
And an unexpected reaction in a character can be the source of a story as the surprisingly dead pan manner the main character responds in The Lost Thing.
Shaun stressed how he never 'explains' emotion in his books but hopes to allow a space for the reader to do that.  And yet he didn't want to distance readers too much. His mum finds fantasy hard so he does seek some sort of emotional connection.
In a world of a quickly digested stream of images, Shaun wondered how could you get people to examine  pictures for longer, meditatively.
Puzzling or incongruous juxtapositions are one way, and an engaging narrative is another.
His book The Arrival started off as a 32 page picture book with a text.  It ended up as a 128 page wordless graphic novel.  He got rid of the words.  They had pulled the story forward too fast.   The beauty of a wordless book is that with pictures you can set the pace to quick or slow, expand or contract it in time, and feel free, unlike in a novel or movie, to  jump or flip back easily.

I could go on.  But  better still,  go to Shaun Tan's site for much much more:
http://www.shauntan.net/

Just as when you leave a good exhibition and you find yourself looking at the world in a new way, the evening took on a colour after that spell of Tan's in Seven Stories.  Walking along the Tyne towards the train station, marvelling at Newcastle's bridges against a glorious sunset,  there were Lost Things everywhere I looked and I wanted to record them all, if only the train hadn't drawn me forward... 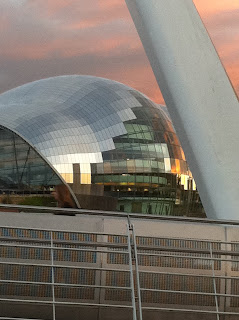 Posted by Bridget Marzo at 03:02 3 comments: Links to this post