Judith Kerr & Shirley Hughes in conversation at the Society of Authors

So glad I braved wet, windy London (streets jam-packed last night due to a tube strike) to see Judith Kerr and Shirley Hughes in conversation at the Society of Authors. Feel I should share some nuggets for those that couldn't make it.  A big thanks to the Society of Authors for making it happen!

Born in 1923 and 1927 respectively, with many classic picture books to their names,  these two world famous author-illustrators could be resting on their laurels but far from it.  They are still very much working, excited by future projects.  Such lively, lateral thinkers, such wit and emotional intelligence!  A true inspiration for us all.

I've been to so many talks by prize-winning picture book authors and illustrators at SCBWI conferences and such  Often, and perhaps surprisingly, picture book authors avoid any reference to their child audience in their speeches.  Some even assert that they don't think of kids at all, creating for themselves or for their own child selves. This talk stood out in that both Kerr and Hughes clearly related to their main readership - children - as well as to their own childhood.

How did they come up with characters?    Shirley Hughes said it all came from sketchbooks. Alfie, the perennial pre-schooler just appeared fully formed in a sketch, and was very anxious to get into a story. She was conscious that Alfie's books are for an age group that can't yet read so a good deal of the story is in the pictures.  His friend Bernard,  she said, is the kind of kid, she said that only a mother could love, the kind who at 16 will get the girl.  They struggle with things that all young children struggle with, doing up laces, leaving their comfort blanket behind to go to a party... Less about her own children, Hughes would  lurk in parks watching and drawing kids move, "how they run and scatter like starlings..."

Kerr's characters were first inspired by cat.  She'd longed for a cat as a child and couldn't have one until she had grown up and settled down.  Mog was the first of nine cats she has had, including a truly weird cat who hated heights. The Tiger who came to tea was her only book which started with the story.  She told it to her daughter every night long before she wrote it down.  And when she and her daughter went to London Zoo, they didn't think of tigers biting but just marvelled at their orange stripes.  It's good said Kerr to include things you like drawing in stories. Do avoid writing about things you don't enjoy drawing!   Kerr confessed she killed Mog off after 16 books, before she informed her publisher.

What of their experience of war time?  Judith Kerr's novel,  When Hitler stole Pink Rabbit is based on  her own childhood fleeing Germany to Switzerland then France and London during the Blitz. Her life-affirming child's perspective offsets the underlying gloom of her family's situation. When they fled to Paris, Judith told her father that she enjoyed being a refugee.

Shirley Hughes found childhood on Merseyside during the Blitz extremely boring if not frightening at times.  Barbed wire, not much to do.  She escaped into stories.  I look forward to reading Shirley Hughes's novel Hero on a Bicycle. Inspired by a true story, it's set in Florence during WW2.    Hughes is delighted what the internet can do thanks to a site that provides children and anyone interested with more historical background to the story. 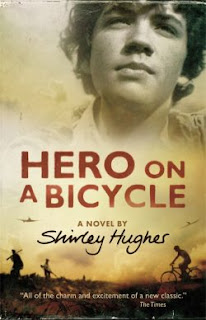 What of the business, the process?  Both said they started by analyzing other picture books, copying out and counting out pages, though Judith confessed she counted wrong at first.  Both said how lucky they are to have great editors - how important the partnership is.  Judith Kerr confessed that she dropped her agent when she told her she was "using too much paper" to write a story, and since then has used the Society of Authors legal advisors to check over her contracts.

Kerr touched a familiar chord in me, talking of the worry when you finish a book - what next?  The casting about for ideas...how to get it right?  It takes a long time.  And unless the story is right, it's hard to draw.

Shirley Hughes appreciated the Society of Authors for the community it offered in what is an otherwise pretty solitary profession. And when she was on the S of A committee in the 1970s, she had defended illustrators' rights in getting equal payment for library loans from the Public Lending Right - thank you Shirley Hughes!

Back to children. Shirley Hughes read out some priceless letters from children and really appreciated teachers encouraging children to send them.  One boy wrote "Dear Shirley Huge (sic) - I think your books are great but my friend doesn't like them. Are you published wildly (sic) abroad?"
Shirley ended by turning the roomful of us authors into children. I was lucky enough to be sitting in the front row to see her draw to a rhyming ditty about Oswald and Jessie who were terribly messy...


I felt like a kid leaving a party.  And now I'll show off my going-away gifts to myself with signed plates in them by each author. 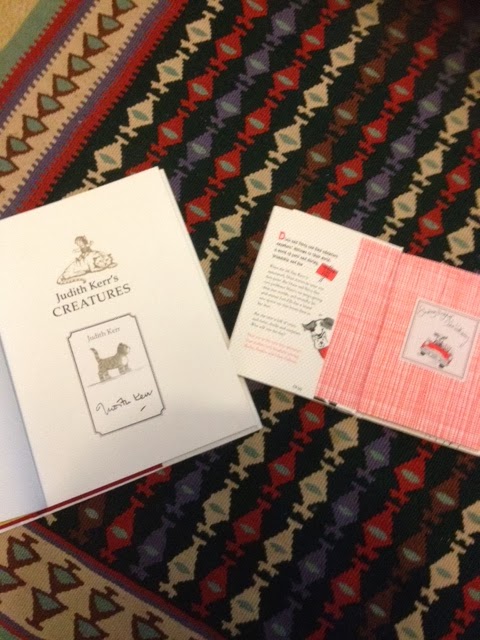 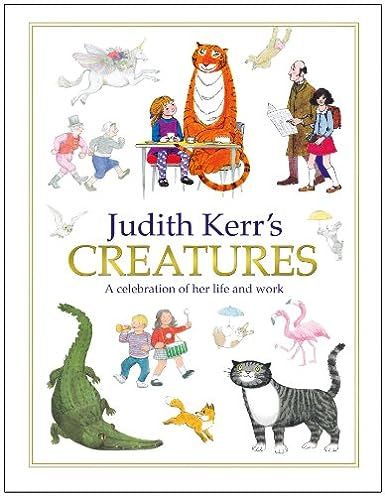 Judith Kerr's Creatures starts
"There are drawings and there are illustrations.  I first discovered the difference aged four and a half at my German kindergarten".
Coming up to her 90th birthday  the book is a big treasure trove whic tells the full and amply illustrated story of her life and work from childhood to her 'last years': roughs, manuscripts, photos and illustrations, fabric designs, cat sketches, oils, thumbnails...

How much fun it has been, Hughes said, to come up with ideas with her daughter Clara.  There are more books to come.
When the young Clara  came home from school, she would use up the discarded watercolour from her mum's palette.  In short she'd provide the tools but leave her to get on with her own thing. My own artist father did the same thing.   Clara's illustrations are very different from her mother's - plus she can draw cars which Shirley Hughes does not like drawing.
Their work and Judith Kerr's too is bursting with vitality, wit, generosity.  Their conversation was testament to that too. Precious ingredients for picture book creators!

Posted by Bridget Marzo at 12:06 7 comments: Links to this post