Sneak peek 3 or spot the difference!

At last! I sent off all the final spreads to Bayard's Belles Histoires yesterday, after well over a month of tweakings, snipping and snappings. 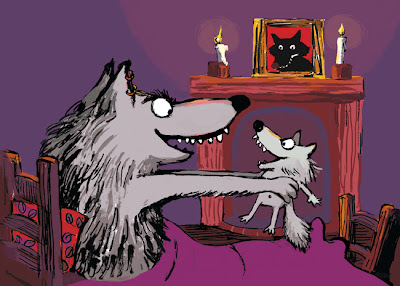 I started this story, due to be published in October, with pencil and brush pen...scanned everything in, then decided that, to save time, I'd do the colour in photoshop.  Big mistake! 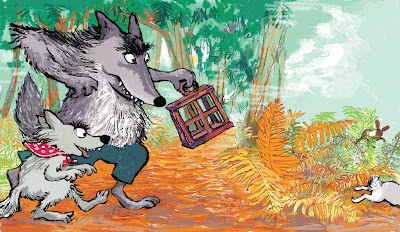 The problem with Photoshop is  - second thoughts, and third and fourth thoughts...

You can carry on revising at infinitum, until there are no more thoughts at all.  Then before you kill the picture altogether, you find yourself going back, to hunt out whatever it was that lurked in that first simple sketch that made it feel alive.
And then you re-sketch, and re-scan and re-draw.  That done, you'll print out and detect a small inconsistency from one spread, to the next.  So you go over everything again, hoping to make every character believable across the whole world you've shaped and every action fresh.  Aaargh! 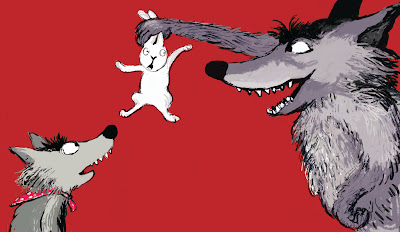 You wonder if anyone else will look at it as hard as you have done.
I can't help thinking that children will.  They are so much better at looking.
In fact I remember how annoyed I was as a child by visual inconsistencies.  A glaring one was on the cover of the old Rupert Bear annuals.  Why oh why did my best friend Rupert have textured brown fur on the book cover when inside he had white fur?  The fact that this was an accepted tradition in Rupert Annuals, with only one exception  - the cover of 1973 meant nothing to me as a child.

By the way in this story, young wolf frees the rabbit, bravely explaining to his wild wolf dad that he prefers potato pie with a sprinkling of thyme on it.
A very French story with food at its heart, written by Céline Claire whose story Une Nuit à L'Ecole I illustrated a while back and is being made into an app. To see the rest of this story, Le Doudou du Loup,  you'll need to be in France and hunt out the October 2012 number of Bayard's prestigious children's magazine Belles Histoires,(which publishes a new picture book story every month) or take out a subscription.
Meanwhile you COULD play 'spot the difference' with my previous sneek peak.
Now, where was I with my own book projects?
Back to the kitchen to give them a stir!
Posted by Bridget Marzo at 16:20 7 comments: