Big draw of a summer and Big Draw October!

Five books in 5 months is a record for me, even if 4 are in black and white and a series and not full picture book size.
Les Contes a Colorier are my adaptations of 4 fairy tales for kids to complete with their own drawing and colouring in... for French publishers Bayard Jeunesse.

Here's one of the covers I just finished. 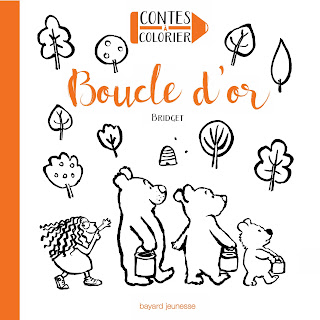 The fifth book is an illustration commision for a picture book by a writer friend Addy Farmer.  The funded project will be for a literacy drive in North Lincolnshire schools.   I took it on for several reasons.  I liked Addy's rhythmic text, and I couldn't resist the chance of working with her  - and in schools directly concerned by the project.

And talking of schools...it's Big Draw month now so Tiz and Ott's Big Draw are taking me places!

First stop tomorrow
at the Guardian Kings Place big draw family day.
I will be there all day alongside a lot of wonderful artists and musicians too,  including Sally Kindberg, Rebecca Ashdown, cartoonist and comic writer Harry Venning, Posy Simonds and more - encouraging everyone else to wield pencils and brushes.

Posted by Bridget Marzo at 00:27 No comments: