All boxed up and ready to go!

I hit the ground hopping after the LA conference, designing the cover of the little box for the seven French rhyme books to slot into.  Bayard explained they'd be sold with a wrapper so I'd need to suggest something of the action of the inside spreads  on the outside.
Here's me bleary-eyed in the early hours, with the first prototype to show my editor. 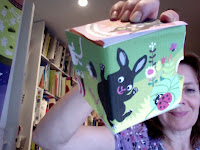 And here's the top of the box with my favourite characters* -  the Trois Petits Minous (in the French version of the Three Little Kittens,  they get chocolate cream for finding their mittens). 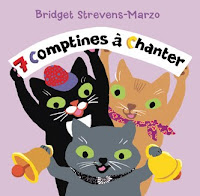 Here are the 3 sides of the box with
the Furet (ferret), the  Escargot, the Souris Vert, the Petit Lapin, the Coccinelle ...
Away in the distance, another creature as bleary-eyed as me, brother Jacques.
Ring a bell?

Ding, dong! I'm ready for a real break.  Off tomorrow with  Mick and Ella to Italy for a week.

I'd hoped to buy an Ipad to use simply as a lightweight colour sketchbook - but they had run out  of all Ipads in LA, and in France so I'll bring whatever paints are allowed on the plane.

*The black and white kitty was my childhood mog, Freddy Whiskers.  Our current elderly grey Pousse Pousse has had a facelift here. And last but not least, before we even got our new ginger kitten Bowie, I'd drawn this ginger one like a wish...
Posted by Bridget Marzo at 14:49 3 comments: