Bologna gets the spring fever going,  for kids book people at least.
Publishers are gathering dummies, books, figures and worrying about flights and stands, illustrators might be polishing off a final pic to show, the Italian fair organizers are doing their best to keep calm and organized...

I'm off on Saturday from Paris,  to meet SCBWI Bologna keynote speaker and friend Leonard Marcus off his NY plane.  I'll be carrying a pile of stuff for the SCBWI Symposium on Monday, as well as a few books and illustrations for my own showcase at the SCBWI Stand (Hall 26, stand A 66)  on Tuesday from 1-2pm.

Still caught up with SCBWI emails and powerpoints, so haven't finished my story roughs I  was hoping to show.

So hard to get the balance right but when you've been dubbed International Illustrator Liaison you can't procrastinate.   I have to think about the group first - a lot of expectations to fulfill the day before the fair opens, moderating panels, helping it go smoothly as possible.  And there's an incredible energy in a group of creative people planning together online from many corners across the world, and then converging or a day's conference and a night in the old town.

Then comes the Fair, and work for the SCBWI stand.   Last but NOT least, I tell myself, my own work for my own Showcase.  I have some cards, and books to show.  Do I need to put a small portfolio together at this point?   Do I have time?   Will I have the energy to paint with my favourite gouaches in the Duelling illustrator event at 3pm ?  And where to go next?   Well I want to see Shaun Tan at the Illustrators Café at 4pm for a start.

The Fair is first and foremost for publisher to sell co-editions of their books to other countries.  I've never been one to push my stuff.  Some people manage to do that so well.  But it's painful to see young illustrators hugging portfolios like camp beds, looking in vain for a shelter.  But who knows what I'll see and who I'll run into?   I'm looking forward to exploring Korea and China and Slovakia and....And I can't wait to see the final mock-up of the book I've just done for Bloomsbury.  Here's to them selling lots of  co-editions of Mini Racer  -a whacky race with an ecological twist.
Here's the final final rough cover with a better road colour and another spread. 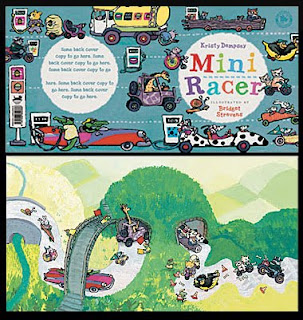 Pictures and text: Gita Wolf "An expanded organisation of meaning"

This article by Gita Wolf, publisher of Tara Books, India  (who will be joining us on our publishers panel in the SCBWI Bologna symposium next week)  says it all so well.
Picture Literature
Here are some snippets from it.

Thought is impossible without an image — Aristotle
When you look at a newspaper article — or an advertisement — what do you see first? The words or the image? And what do you remember later? If you are like most people, the odds are that the picture — the frozen moment or the carefully constructed image — will stay with you longer.
This is simply part of the human condition...

But when it comes to books and literature, pictures (at least for the adult reader) are traditionally seen as mere supplements to the text. Literature has largely come to mean the written word. There is a long and complex history behind why this is so, but the fact remains that in the literate world, the word triumphs over the image...

This is most obvious when we consider children. In children’s literature, we assume that it is the very young child who enjoys picture books. The older a child gets, the more she is lead towards reading ‘proper’ books. Children typically graduate from the visual to the word.
Seen another way, it is implicit that those who can read well will not spend too much time on a visual account of the same thing...

We forget that when a subject is rendered visually, it will not be the same thing.

The way we construct meaning from an image is through our perception of line, colour, form, depth and motion. Even with all this, our perception of the image as a whole is still more than just the sum of its parts. ‘Image’ resonates with the possibilities inherent in ‘imagination’. When words and images work together well, they don’t just say the same thing in two different ways.
They amplify each other, creating an experience that is an altogether distinct and expanded organisation of meaning.

Combining pictures & words
Delving into what this special experience could be has been a key project with Tara — the publishing house I’m part of — for the past decade. We’ve experimented with picture books not only for children, but for readers of all ages, trying to widen the experience of literature, given our fascination with visual communication.    Gita Wolf.

Gita Wolf of Tara Books will be talking in our SCBWI Bologna symposium.
Posted by Bridget Marzo at 12:37 No comments:

On to Bologna!: " As children's publishers from the world over convene in I..."
Posted by Bridget Marzo at 01:06 No comments: