I can recommend taking some time out to mix and create your own colours.

That is part of what we did at my recent workshop at the wonderful Bethlem Museum of the Mind  (an ArtFund Museum of the Year finalist)  And we all had a wonderfully focused, creative time.
I started by serving over 20 plates like below, to adults and children of all ages from 5 to over 70...
Armed with this substitute palette, a couple of brushes (one doing the job of a spatula and one for painting) and a long strip of paper to paint on,  the first aim was to mix as many colours - as possible out of the 3 primaries - including black or near black.

Here are 4 vertical strips each by a different workshopper.  They are almost like colour signatures. Everyone comes up with their own  amazingly distinctive colour range (and brush marks) from the three primaries.

Posted by Bridget Marzo at 11:03 No comments:

Katsumi Komagata at Foyles and ELCAF in London - and his transformative, transforming books

Lots to catch up with but first, a significant moment yesterday evening at Foyles - Katsumi Komagata's first talk ever in England and this coming weekend his first workshop open to all at the ELCAF festival.  Big thanks to their European funded initiative that he has been able to make it to London at last! 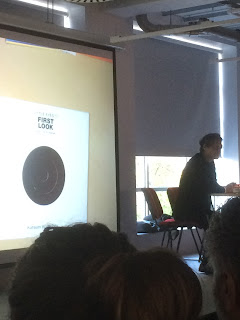 Coincidentally earlier this year I had written about my own discovery of Komagata in the UK's Association of Illustrators Varoom Magazine.  You can read my article  'Unfolding Stories' here (I love their layout!) :

It was wonderful to see Komagata talk about the series of books he created from observing  and dialoguing with his daughter from 3 months till around 12 years of age  (she has now just married at 27!) Here he shows one  workshop piece that came out of an exchange in one of his many workshops:

I felt like it was also a part of my own personal history catching up with itself.  When I lived in France I would  take friends and Parsons students to see the Trois Ourses book collection.  We'd explore and play with their valise of books containing  Komagata's Little Eye series, and other innovative book makers from Bruno Munari onwards.

Komagata referred to how it was a librarian from France (Elizabeth Lortic who co-founded Les Trois Ourses) who spotted his Little Eye books in MoMA New York and invited him first to France.  From there he has been published and done workshops in many other countries (except the UK!).  His work has had an undoubted influence on the French children's publishing industry in particular.

If you are interested in  a lateral view of picture books and artist's work for children, I recommend a making an appointment to visit Les Trois Ourses in Paris.
And if you can't make the ELCAF festival this weekend, I learnt from John L. Walters of eye magazine last night that you can find Komagata also in the Bookart Bookshop in London too!
Posted by Bridget Marzo at 18:54 No comments: