You can whisper or shout, hum or sing, but we'll recognize your voice  - unless you're a perfect mimic.  It's that simple, I tell my students who often fret about 'style'.  I tell them the style's not what matters...any style could work as long as they are sure about what they're doing, the content that they're talking about - as long as they have a voice.

But not everyone's voice is  confident and clear, especially when you're having to prove yourself, do a test piece for a competition or hook a publisher.
It's just like walking onto a stage. You become self-conscious and then shaky.
It's only when you forget about yourself and you think of the message you want to get across, then your voice takes off.

The metaphor works for me, at least, especially as I've often played with styles - and worried in the past, about having different styles.   It wasn't until Bayard Jeunesse 'found me out'  a few years ago, that I started to relax about my different styles.  Bayard had used my bold graphic style in games for their magazines and posters for toddlers,  which culminated in this, the Big Book for Little Hands.... 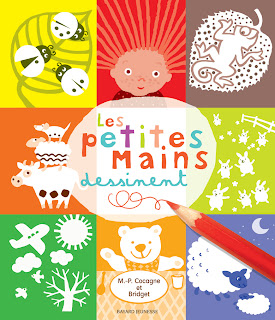 which was first published in France in 2006 and then in the UK and elsewhere (and was one  of the first  'doodle books'  of many following in the wake of Taro Gomi's books for older children)
By that time, they had already tumbled other styles I used for other books in other countries, discovering this 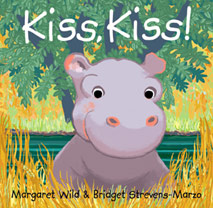 at the 2003  Bologna Book Fair and later this 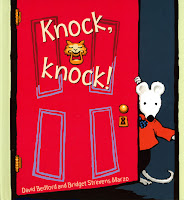 "But my Kiss, kiss! style is so different from what you know of me! " I  told my Bayard art director.   "Yes is it",  she said,  "but  it has the same voice".
Funny thing is, you can't quite hear your own voice as it sounds to others.   And most people, including me, don't like listening to their own recorded voices.  So you can't be self-conscious about it.  It just IS!

And here today is Anthony Browne, master of the picture book  and British Children's Laureate  saying the same thing about voice, at  the end of this video. What a wide variety of voices were chosen for this years UK Best New Illustrators awards!

Artist and children's author-illustrator Brian Karas,  whom I invited a while back to talk for SCBWI France about his book The Young Zeus,
shows a great way to use a free 3D computer modelling tool, Google Sketchup for visualizing a house and neighbourhood, in his great  trailer for his new book Neville written by Norton Juster (of Phantom Tollbooth fame).


But what really makes it all work, in my book,  is the feeling behind the process,  how he puts himself in in the shoes of his main character, into his world.


When you've got that identification right, when you feel at home in the story, any or every tool you use to help you illustrate it, will work.


As illustrators  we can easily get  hung up on style  -   one way to do things, one type of process.  To me, that's putting the cart before the horse.  The horse is the content - that's what drives us.  And with that,  we can draw along (excuse the pun!)  with a single nib or a whole wonderful cartload of pens, computer software,  paints, paper - you name it!

I like dots.
I like dogs (and cats).
I like the way a small kid's finger is drawn to touch a dot,
first of all,  before any square or a triangle.
I like how the eye of a small child,
the tip of their finger
and the dot,
meet.

If  on GotStory Countdown
you scroll beyond Jed Henry's dogs
and Patricia Intriago's book about dots,
you can peek inside a bit more of my work for Mini Racer including a storyboard rough.
And I just realized that it's a a neat visual conclusion;
my Dog car is a Dot car.
In fact it always was a
dotty dog car
from the word GO
as you can see below.
Thank you Joy Chu for putting dogs and dots together and making us all happy!