In a week I've been to London and back and wound up Paris courses at Parsons and the American University and revised and got the go-ahead on finals for the Snail book and accepted and done roughs for two spreads for Pomme d'Api and caught up with emails for the scbwi Bologna conference with the great result that Harper US art director Martha Rago and publisher Neal Porter of Roaring Brook US will be joining my First Look panel.
That had to be one sentence.
It was a quick, quick week.
But this morning and evening -  a  slow slow drive through thick snow to Chantilly station and Paris for my last  teaching day until late January.
Here's a colour revison of the rainy Snail cover.  Tourbillon like these colours - more spring like?
Now to polishing this (so the rain doesn't look like snow)  along with the other 4 spreads up to finals, before we drive off to Blighty on Saturday.  Snail's pace again if there's more ice and snow. 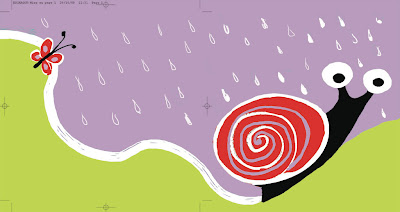 Posted by Bridget Marzo at 00:36 No comments:

The French national children's book fair, the Salon du livre de Montreuil always blows a small whirlwind through my studio.  I come back with new books and catalogues and leaflets about kids books and receipts with little time to focus on them and sort. 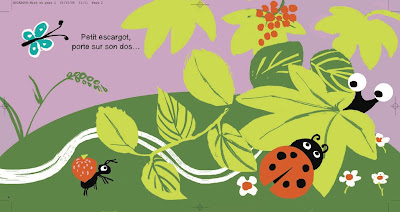 This year I was drawn to several stands  like a kid to a sweet shop, intrigued by a flush of interesting colour schemes and playfulness.  The first stand that attracted me by happy chance was Tourbillon.  Loved their adventurous novelty books.  Particularly a little  bold black, white and red board book by Xavier Deneux, Mon Cirque which played so cleverly with windows and surprises.   http://www.editions-tourbillon.fr/spip.php?article239 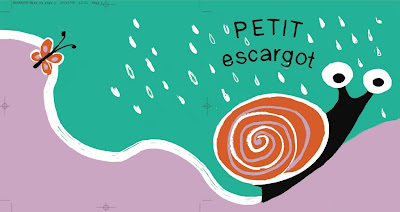 As luck would have it, they were the publishers that contacted me to do the little bath book about the snail.  I had said yes, without realizing how much I'd like their books.    It's only 5 spreads.  As it's to be screen-printed on plastic, I can only use 5 pantone colours.  Refreshed by the Salon,  I moved on from  my previous snails posted.
Not sure what the art director will say but at the top here is an inside spread  of the snail, before we get to his 'house'. It's quite a developed rough.   And here's my rough cover ( back and front on the right) for the bath book which shows the snail's progress since my first post.  Does it look like it's raining?  I've got puddles on the last page...
Posted by Bridget Marzo at 22:45 2 comments: 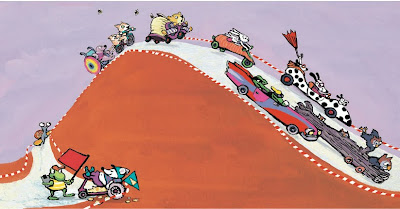 There are times when instead of drawing,  I feel like this mouse  - sleepy from distraction.  (In her case she's eaten most of her cheese-cart)   Times when like my snail here,  I struggle onwards, as the cliche goes  - and upwards.  And sometimes drawing is speedy -  almost too speedy.  You love the idea.  Woo-ahh! Hang on!  Were are you heading?   Slow down!    This is spread 6 of Mini Racer. 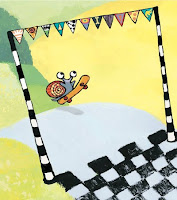 I just finished illustrating Mini Racer,  a kid's book about a race where I decided a long, long time ago that the snail wins.  The author Kristy Dempsey kindly left all the character choices open to me the illustrator.   I normally meet deadlines.  But this was over a year overdue, more.

Bloomsbury UK/US have been very understanding. My mother died and my son was very ill and I was channel hopping between my daughter continuing school, back home in France and my mother's house near London and my partner's part-time London flat.
There was a lot to sort out.
Including an old studio full of my artist-illustrator father's work. He worked almost every day of the week, almost every month of the year, until he was over 80 - a lot of pictures to take stock of.
But at last, picture by picture, the web site about him which I had promised my mother before she died, is now up. http://www.johnstrevens.com

My son is, fingers crossed, well on the mend.
And  picture by picture, the two very different picture books commissioned way back by Little Hare and by Bloomsbury US/UK are now done.  I'll talk about them more one day.  I better update my own website too one day.

For now, enough that my snail  finally crawled, slithered and skated to completion, leaving behind him a lot of work on eleven fellow mini racers, among them gas-guzzling crocs, a high, haughty giraffe that gets stuck in her SUV, an owl family on a trunk, cats on a cycle, a seal on a wheelchair...

Barely had my snail passed the post, than  I get a commission for a bath book in limited colours, from a nice French publisher Tourbillon, for another snail.  Pourquoi pas?
My first bath book.
And a more graphic snail is now on the menu.
I crawl slowly into any work and into this blog. Patience!  Here are first sketches... 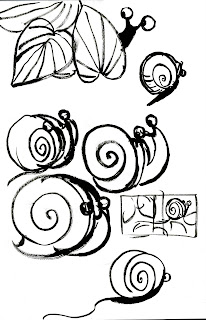 and a second roughed in photoshop 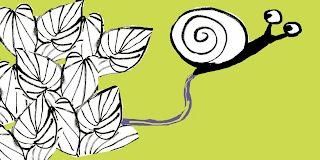 Below is an alternative snail.  More clumpy but stronger, more bath-like, perhaps.

Choices, choices.  Which do you prefer?  Maybe I'll find some more in my garden. 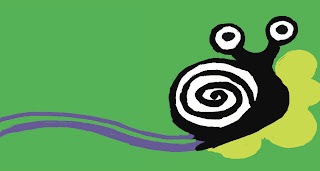