March went by fast, as a harsh east wind blew over London. Where to start?
Well I've just finished the tweaks of the tweaks, adapting an old project of mine from the Draw Along Tales for Bayard's Tralalire magazine to come out this summer for kids to 'participate' in with 4 felt pens.  These are the almost finals on my wall at my home studio.

Final tweak was to remove the belt on the straw-sucking, lazy little pig (yellow) and turned him into a hoodie!

I came up with the Draw Along Tales for play on paper and screen,  just before a spate of family illness after late 2008.  When I looked up again a year or more later, after my ma's funeral and all, I found that Nosy Crow came out with their first app of the Three Little Piggies so my draw-inside version stayed inside my drawer. My idea had actually come from another pun - "draw the curtains quick!"
But nowhere's room for even more versions of tales in the App and doodle book worlds.
So ahem - if you're a serious publisher interested in seeing more of my Draw Along Tales project I and my agent at Hen & Ink are all ears!

My intention for the Draw Along Tales is to be usefully rough, to give kids the open-endedness to intervene and complete the story with all kinds of mark-making.
So interesting that Viv Schwartz  talks about being "usefully awkward" 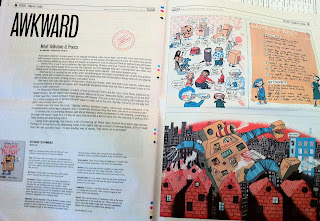 in my first 'report' as contributing editor for Children's Books for Varoom.  Thanks to Derek Brazell for inviting me to be part of this cool and interesting quarterly about illustration big and small!
Hope I helped as a small cog to help spin the wheels of Flying Eye, the innovative comic book publisher Nobrow's new and exciting children's book imprint.
(I think it's hopeful and significant that publishers historically from opposite ends of the children's editorial spectrum, Nobrow and Usborne were the only UK publishers showing and networking at the paradise for children's imagery and illustration full stop, of the 2012 French Children's Book Fair in Montreuil, Paris

Yet another March writing job and another honour.  I was invited to be the first featured illustrator for the new, daily updated online magazine for children's publishing people, Words & Pictures.  It took me a ridiculous amount of time to put together but I've let the cat out of my overladen bag, and shown some work I did in a previous life.

But it's not been all about work.  Just had the most wonderful time looking at one of my favourite 1950s illustrators on the top of Tower Bridge but it deserves it's own post.  Coming next!
Posted by Bridget Marzo at 18:49

Gosh Bridget you really have been busy haven't you! Your artwork looks wonderful the tweaks of tweaks have clearly gone well.